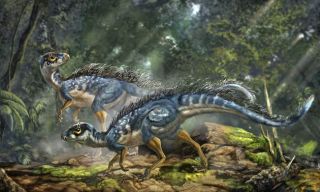 Feathers and other feather-like stuff are known in several so-called saurischian dinosaurs, including tyrannosaurs and maniraptors — the ancestors to modern birds. Now, feather-like structures have been found for the first time in dinosaurs other than saurischians.

The finding upends paleontological thinking about feathers, suggesting they might go back to the origin of all dinosaurs, more than 200 million years.

The newest fuzzy dinosaur is a so-called heterodontosaur (Tianyulong confuciusi) and it belongs to the mainly vegetarian "ornithischian" group of dinosaurs, one of the two major groups of dinosaurs along with the frequently carnivorous saurischians. Heterodontosaurs had fox-sized bodies and lived as far back as 198 million years ago in the Cretaceous Period.

The fossil was found in the well-known Liaoning Province fossil beds in China and is described by Xioa-Ting Zheng of the Shandong Tianyu Museum of Nature in China; Hai-Lu You of the Chinese Academy of Geological Sciences' Institute of Geology; and Xing Xu and Zhi-Ming Dong of the Chinese Academy of Science's Institute of Vertebrate Paleontology and Paleoanthropology in the March 19 issue of the journal Nature.

The team found evidence of hollow, feather-like structures, with no branching, on the fossil creature's neck, back and tail, some of which were more than 2 inches long. However, these structures are a far cry from the bird feathers typically found in today's backyards.

Scientists are pretty sure that numerous dinosaurs never had feathers, such as triceratops and its kin, and hadrosaurs (duck-bill) dinosaurs.

But at this point, there are at least four kinds of feathers and quills known in dinosaurs, including "true" feathers, like those on many of today's birds. Those flat feathers, with a central quill and then the classic branching vanes, have been found in some maniraptors, along with some quill-free, ribbon-like feathers found in a maniraptor called Epidexipteryx hui.

A second type of feathers, downy or proto-feathers, have also been found on maniraptors (which are saurischians) and modern birds.

The feather-like structures found on the new heterodontosaur fossil are rigid, tubular and not that downy, You writes. They somewhat resemble relatively long, stiff, quills or bristles that have been reported on psittacosaurs — only the psittacosaur's are stiffer and more widely separated.

So basically, until now, it was thought that feathers were only found in the saurischian branch of dinosaurs. "The issue with this heterodontosaurid is we never thought these guys, ornithischians, would have anything related to feathers," said anatomist Lawrence Witmer of Ohio University, who has studied heterodontosaurs in the past and wrote an accompanying article in Nature commenting on the new finding. Origin of feathers Previously, scientists figured that feather-like structures and feathers evolved later in the dinosaur family tree, probably a couple times and just among saurischian dinosaurs. Now, if You's interpretation of the Tianyulong fossil is right, it looks more like feathers evolved early in the dinosaur family tree at or before the saurischian/ornithischian split and were instead lost numerous times. Heterodontosaurs are thought to be one of the most evolutionarily basal (or primitive) groups among ornithischians. "Finding something that looks like these feather-like features or proto-feathers in heterodontosaurs raises questions of whether the ancestral dinosaur was a fuzzy little animal," Witmer said. "That's a big surprise and it turns out that raises new questions, which either means that many dinosaurs then, in fact, lost this fuzzy little coat, or another option is that the ancestral dinosaur wasn't covered in fuzz but what we see in this heterodontosaur might be a separate evolution of some sort of projecting epidermal filament." More and more of the feather-like structures in dinosaurs suggest that evolution is throwing unexpected curveballs, Witmer said, which begs the question of what gets called a feather. "Sometimes new discoveries don't clarify things. They make the picture cloudier," he said.   For instance, it is unclear at this point if Tianyulong's feather-like structures are part of the same evolutionary lineage as the feathers on today's birds and the same lineage that yielded the proto-feathers on early theropods. Also, it's possible that the Tianyulong feather-like structures really occurred under the skin, not outside it. That would change all these arguments, suggesting that the structures are collagen features in the skin, not feathery. Witmer figures that dinosaurs are all very visually oriented animals and have visually oriented display structures. So it's conceivable that these animals could have evolved feather-like structures independently, but the fact remains the feather-like structures look quite a bit like those found in predatory dinosaurs, he said. "The reality is that dinosaurs may have evolved a variety of projecting integumentary appendages, things that stick out of the skin, and may have evolved them for a lot of the same reasons, for behavioral display or for regulating body temperature," Witmer said.

You et al.'s research was supported by the National Natural Science Foundation of China, the 973 Project and the Basic Outlay of Scientific Research Work from the Ministry of Science and Technology, and the Hundred Talents Project of the Ministry of Land and Resources of China.