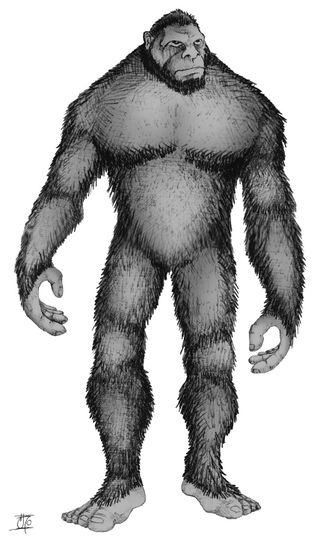 More than a quarter of Americans believe in Bigfoot, a recent poll found. They claim this legendary bipedal ape, a "long lost relative" of humans, evades detection in remote woodland areas. Although it may seem strange to think a 7-foot-tall land mammal could go unnoticed for so long, the notion is actually widespread.

Along with that sizeable minority of Americans, an Angus Reid Public Opinion poll found that 21 percent of Canadians also believe in an undiscovered hairy humanoid, which they prefer to call Sasquatch. In Russia, belief in a similar creature, called the Yeti, is so common that local branches of the Russian government have funded Yeti expeditions, and the country has even considered founding an entire institute devoted to the study of Yetis.

The Yeti is also said to roam the Himalayas, sometimes going by the name of Meh-Teh, or the "Abominable Snowman." Not to be outdone, Australia has the Yowie, and South America, a mythical beast called Mapinguari. Malaysians, meanwhile, fear the orang minyak, or "oily man" monster.

Why do so many disparate cultures have their own version of a "wild man"?

Although no one knows for certain how the various legends got started, they appear to have arisen independently in each culture rather than being spread by travelers or through trade, said Benjamin Radford, deputy editor of Skeptical Inquirer magazine and author of three books on myths and mysteries, including "Scientific Paranormal Investigation: How to Solve Unexplained Mysteries" (Rhombus, 2010). [The Best Bigfoot Hunting Expeditions]

Most of the myths trace back much further than the 1950s, when the explorer Eric Shipton photographed what he took to be "Abominable Snowman" footprints on Mount Everest. "While the famous Abominable Snowman snow track photographs ... led to worldwide interest in the creature, they didn't create the beast but instead for the first time offered tantalizing, tangible evidence of a regional legend," Radford said.

Bryan Sykes, a professor of human genetics at Oxford University who recently embarked on a project to DNA test any or all available evidence for the existence of Bigfoot, said belief in Bigfoot-like beasts is a very consistent feature across cultures — "so much so that I have read about indigenous people not even bothering to question their existence as they are so much a part of everyday life," he said. The reason for the myth's wide occurrence "is one thing I intend to try and find out," Sykes told Life's Little Mysteries.

But the existence of so many separate myths don't necessarily count as mounting evidence that we really do have feral cousins out there in the woods. Instead, the myths may all stem from the same aspect of the human psyche: the desire for and fascination with an "other."

Radford said, "The idea of a wild, man-like 'other' creature co-existing with us but just beyond our understanding is heavily rooted in mythology."