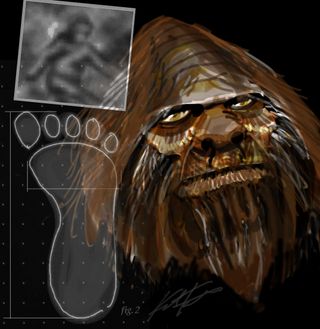 Bigfoot in all his (her) glory.
(Image: © Karl Tate, LiveScience Infographic Artist)

Americans are more likely than Canadians to think that Bigfoot is real, while Scots more commonly believe in the Loch Ness monster than English people, a new survey finds.

In Canada, Albertans are the biggest Bigfoot believers, while in United States, people in the West (where most sightings occur) reported the highest rates of belief. [Russians Claim 'Indisputable Proof' of Yeti ]

Across the pond in Great Britain, there was a similar national divide on matters of mythical beasts. Only 17 percent of English people believe theLoch Ness Monster is "definitely" or "probably" real, a proportion that jumps to 24 percent in Scotland.

Among the several thousand who were surveyed, there was no correlation between political affiliation and likelihood of belief across the board. While Liberal Party voters in Canada were the least likely to believe in Bigfoot, Democrats in the U.S. were the most likely. In Britain, almost a third of Scottish National Party (SNP) voters — the country's most conservative party — believe the Loch Ness Monster is real, while only 15 percent of Liberal Democrats agree with that assessment.

In short, conservatism was associated with belief in monsters in Canada and Scotland, while liberalism was tied to monster belief in the U.S.