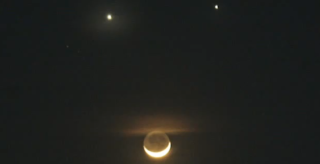 Venus (left) and Jupiter (right) at a conjunction in the night sky.
(Image: © TelegraphTV | YouTube)

Jupiter and Venus will mingle in the night sky tonight (Mar. 13), and Robert Massey of the Royal Astronomical Society says he would not be surprised if the pair of planets are mistaken for UFOs.

"Venus and Jupiter are at what we call a 'conjunction,' and that means that they just appear close in the sky," Massey, the deputy executive secretary at the RAS, told the English newspaper The Daily Telegraph. "Now I should stress that that doesn't actually mean these two planets are physically close together — Jupiter is something like seven times as far away from the Earth as Venus is — but it's an optical illusion. They're both in the same direction."

The planets will "look like two blazing beacons in the sky," he continued, "and I wouldn't be surprised at all if the … police and the [Ministry of Defense] and the [Royal Air Force] get calls about UFO sightings. Because it's a spectacular sight and quite unusual and I think for that reason people really will be struck by it."

The Ministry of Defense is the branch of the U.K. government that deals with UFO reports.

In fact, the planet Venus frequently gets mistaken for a UFO. To viewers on Earth, the second planet from the sun appears as a bright light that hangs in the sunset sky, seeming to slowly hover in the twilight as it outshines every star except for the sun. Because Venus orbits the sun inside our own orbit, from our perspective it constantly darts out on either side of the sun, which can seem UFO-like.

Massey said that Jupiter and Venus will be visible right after sunset in the west southwest, and will move westward and down toward the horizon as the night progresses. They will appear closest together Mar. 13, but will remain close for several subsequent nights. Venus will be the brighter of the two.