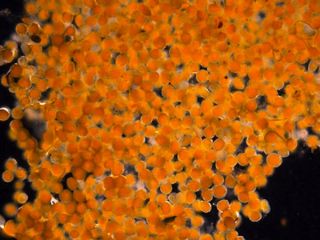 The orange goo that washed ashore near the village of Kivalina was identified as microscopic eggs (shown here) from a crustacean.
(Image: © NOAA Fisheries)

A bizarre orange goo that invaded and baffled a remote Alaskan village and caught the world’s attention last year has been identified. Despite occasional conspiracy theories and Internet speculation, it was both nonalien and nontoxic. But beyond that, nobody really knew what to make of it. Until now.

Researchers from the National Oceanic and Atmospheric Administration (NOAA) first believed that the weird goo was created by millions of tiny crustacean eggs, with fatty oil seen through the transparent egg sacs causing the curious orange color. Upon closer analysis, the scientists changed their diagnosis, saying that it was actually a mass of spores from a type of fungus called rust – named so for its distinctive orange color – though in a quantity and location never before seen.

But part of the mystery remained: the scientists were unable to positively identify the exact species of rust fungus; the sample they tested did not match any comparison samples, nor anything anyone there had seen. What could it mean?

It might mean that the weird ooze was some undiscovered species of rust fungus. Or it could mean that the sample was not unknown, but instead simply didn't happen to match anything in the NOAA database. After all, NOAA's specialty is oceans and the atmosphere, not fungal microbes. For that, you need a mycologist — a botanist who specializes in fungi. Indeed, conclusive identification came from a collaboration between the American and Canadian Forest Services.

Writer Jennifer Frazer covered the strange story on her “Artful Amoeba" blog for Scientific American, and reported that the mystery had finally been solved: "the identity of the rust has been revealed at last. It is the Spruce-Labrador Tea Needle Rust, Chrysomyxa ledicola, a parasite of both spruce trees and a rhododendron — a flowering woody shrub common to conifer understories the world over — called Labrador Tea."

It's not the first time that millions of tiny living things have caused a massive mystery. In 2010, a bizarre, 4-foot (1.2 meters) brown-and-yellow blob discovered in a lake in Newport News, Va., caused a commotion and made national news. Some thought it was a monster; others suspected an alien or even a movie prop. In a twist reminiscent of the Alaskan goo, the mysterious aquatic blob turned out to be a bryozoan, a colony of tiny animals that eat algae.

It's not entirely clear why the fungi and bryozoans in these cases appeared in such remarkable quantities, but there's no doubt that they are perfectly natural phenomena.

Benjamin Radford is deputy editor of Skeptical Inquirer science magazine and author of "Scientific Paranormal Investigation: How to Solve Unexplained Mysteries". His website is www.BenjaminRadford.com.