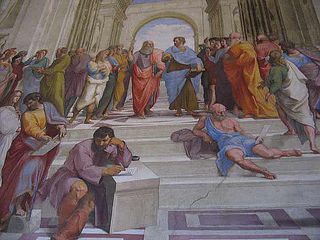 The 'School of Athens' fresco by Raphael, housed in the Vatican, is meant to represent the Greek agora and all the great minds that passed through it.
(Image: © Heather Whipps)

CHICAGO - The first mathematical use of the concept of actual infinity has been pushed back some 2,000 years via a new analysis of a tattered page of parchment on which a medieval monk in Constantinople copied the third century B.C. work of the Greek mathematician Archimedes.

Infinity is one of the most fundamental questions in mathematics and still remains an unsolved riddle. For instance, if you add or subtract a number from infinity, the remaining value is still infinity, some Indian philosophers said. Mathematicians today refer to actual infinity as an uncountable set of numbers such as the number of points existing on a line at the same time, while a potential infinity is an endless sequence that unfolds consecutively over time.

The parchment page comes from the 348-page Archimedes Palimpsest, the oldest copy of some of the Greek genius' writings, which were hidden for centuries because a monk partly scraped them off the animal-skin parchment in the 13th century A.D. to clear the pages to print a prayer book. Also, a forger painted pictures over the prayer book hundreds of years after that.

A scholar named Johan Ludvig Heiberg in 1906 studied the written remnants behind the religious words to discover the Palimpsest, finding evidence of Archimedes' systematic use of the concept of infinity in a portion of the document called the Method of Mechanical Theorems. In the past few years, the Palimpsest was re-examined at a far higher level of detail using multispectral imaging and also a hair-thin X-ray scanning technique at Stanford University's Synchrotron Radiation Lightsource in California. The scanner can image a million pixels in less than one hour.

With one of the X-ray images, Stanford classicist Reviel Netz made out the edge of a torn page, where Heiberg had figured just one line of text was missing. The X-rays produced images of iron from the ink used on the document.

Netz examined the scan and was able to deduce the presence of previously unseen Greek letters, kappa and alpha, which were likely followed by an iota to spell the Greek word for "and." This led Netz to conclude that two lines were missing, rather than one and to arrive at a new reading of the passage, physicist Uwe Bergmann of the Synchrotron facility told a small group of reporters here Sunday at the American Association for the Advancement of Science.

"Scholars are now talking about some new words which are emerging in the reconstruction of the evidence in introduction to the Method, that Archimedes' concept of infinity was rather different from what was previously thought," Bergmann said.

The Palimpsest resides at the Walters Museum of Art in Baltimore.

The Archimedes Palimpsest project forced researchers to come up with a new system to scan large objects, Bergmann said. A commercial-grade X-ray scanning machine might take a year to complete a scan that the Stanford Synchrotron now can complete in half a day, he said.

"It is now taking milliseconds rather than seconds to get each pixel — that has been for us the great novelty," he said.