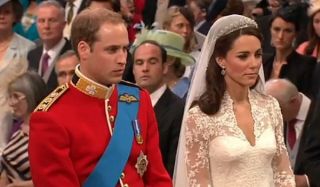 As Prince William and Kate Middleton wed on April 29, they were bestowed with not one but three new titles. Middleton is now a duchess, countess and baroness -- but not a princess.

Despite all the new titles, Middleton didn't become a princess on her wedding day but she may eventually. The son of Prince Charles and Princess Diana, Prince William was born with the title of His Royal Highness Prince William of Wales, but he will only officially become the Prince of Wales when Prince Charles ascends to the throne in place of his mother, Queen Elizabeth II, and passes the Prince of Wales title down to William.

Middleton can only become a princess when that happens, but even then, she won't be Princess Catherine she'll be Princess William. According to British royal protocol, she can only be called "Princess Catherine" if she had been born a princess. Because of her pre-wedding status as a "commoner," she won't be gaining the princess title in her own right, so she'll take on her husband's name instead, becoming "Princess William of Wales."

The protocol doesn't apply when she takes the throne. When William becomes king, Kate will get her name back, becoming Her Majesty Queen Catherine (the country's sixth Queen Catherine).

But for now, the couple will have to make do with the batch of titles that Queen Elizabeth II has given them to mark their wedding . They are currently the Duke and Duchess of Cambridge, the Earl and Countess of Strathearn, and the Baron and Baroness of Carrickfergus.

Dukedom is the highest hereditary rank of the British peerage, and a duchess holds equal rank to a duke. The Scottish titles of Earl and Countess of Strathearn romantically reflect the location where the couple met nine years ago as students at the University of St. Andrews near Strathearn, Scotland.

Their third title as Baron and Baroness of Carrickfergus has actually been extinct since 1883. Carrickfergus is the oldest town in County Antrim, one of the six counties that make up Northern Ireland. Queen Elizabeth II's decision to revive the title may serve to represent the royal family's rule over Northern Ireland.

Even with all her new titles, and despite the fact that she's not quite a princess yet , Middleton will probably become known as just "Princess Catherine" anyway -- at least unofficially.