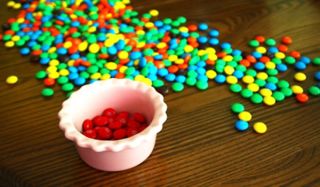 Around Valentine's Day and Christmas, red M&M's dominate the candy aisles but it hasn't always been that way. These classic chocolate candies were absent from store shelves across the United States for more than a decade because of their color.

In 1976, Mars, the candy company that makes M&M's, eliminated the red version of the candies from their mix. This decision came as a result of public controversy surrounding a synthetic dye called FD&C Red No. 2, also known as amaranth. The dye was used in red food coloring and was linked to cancer in a 1971 Russian study.

Because Red No. 2 was used to color many food products in the U.S., including hot dog casings and ice cream, the public demanded that the government confirm the dye's safety. The Food and Drug Administration's subsequent tests produced inconclusive results in humans, but found that it caused malignant tumors in female rats . The FDA concluded that the food colorant could not be presumed to be safe for human consumption and banned it in 1976.

Red M&M's disappeared shortly after the FDA issued its ruling , suggesting they were one of the Red No. 2 culprits. But consumers never faced any risk from red M&M's.

"The red food coloring in question was not actually used in M&M's chocolate candies," according to mms.com. "However, to avoid consumer confusion, the red candies were pulled from the color mix."

Afraid that worried shoppers would steer clear of M&M's altogether if the bags contained anything red, Mars removed the red candies from production and replaced them with orange M&M's, which were added to the traditional brown, green and yellow lineup of colors. It's hard to imagine that Red, one of the now-famous M&M's mascots, was out of production for more than a decade. But as this 1986 M&M's commercial shows, during the Red No. 2 scare, the red-shelled candies were nowhere to be seen.

Mars reintroduced red M&M's, but kept orange in the bag, in 1987, once the panic surrounding anything red had passed.