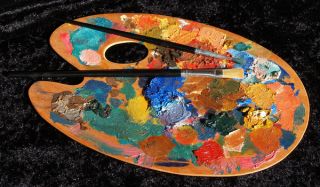 What fetches high prices for paintings is a host of factors, including aesthetic appeal. Other value-driving aspects include the painter
(Image: © johnnyberg | sxc.hu)

As the old adage goes, beauty is in the eye of the beholder, and that beauty can go for quite a pretty penny.

The most expensive painting ever sold is Jackson Pollock's "No. 5" (1948), which sold for $140 million, according to an article published in The New York Times. The auction house Sotheby's is said to have brokered the sale from Hollywood entertainment magnate David Geffen to Mexican financier David Martinez. (Although some reports claim that David Martinez is not the buyer of the Pollock painting.)

Pollock's 4-foot by 8-foot (1.2-meter by 2.4-meter) fiberboard splashed with streaks of red, yellow and gray paint broke the previous record for the most expensive painting ever sold set by Gustav Klimt's "Adele Bloch-Bauer I" (1907), which cosmetics heir Ronald S. Lauder reportedly purchased for $135 million in July 2006.

Other high-priced paintings include Picasso's "Nu au Plateau de Sculpteur" (Nude, Green Leaves and Bust, 1932), which sold this year for $106.5 million at auction house Christie's setting a record as the most expensive painting ever sold at auction and Claude Monet's "Water Lily Pond," which reportedly sold at Christie's in 2008 for $80 million.

What fetches these high prices is a host of factors, including aesthetic appeal. Other value-driving aspects include the painter's name his or her fame and the rarity of that artist's works. For example, Picasso's art usually sells for a high price because of his name and because there aren't many unclaimed works on the market. Additional allure comes from the back-story how the artist came to complete the work of art.