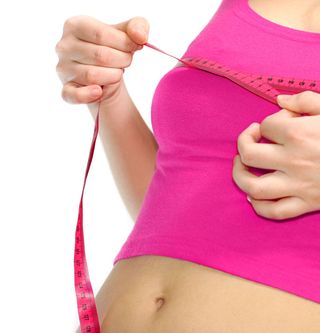 In the last 15 years, the average bust size has increased from 34B to 36C. Whether the lift is due to breast augmentation surgeries or a side-effect of expanding waistlines is not known.

Either way, from slinky to full-coverage undergarments, bras have graced the bodies of women since the 1800s. But modern bra sizing didn't come into fashion until 1928.

As if measured and weighed for a delectable recipe, breasts are sized in cups, with the following conversions:

Bras must support a pair of breasts that can weigh just over a half pound (0.3 kilograms) to a whopping 20 pounds (9 kilograms).

Here are some other facts about one of your most intimate pieces of apparel, according to "Secret History of the Bra," which will air on National Geographic Channel starting Sept. 28: