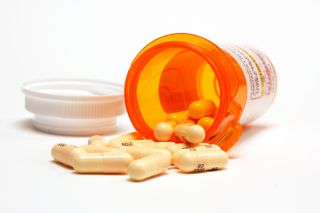 Antibiotics stop the growth of microbes in the body.
(Image: © Pills image via Shutterstock)

When you get sick, more often than not the miscreant is a microbe, and doctors often fight back with antibiotics. The relationship between microscopic misery merchants and antibiotics is like that of the Bloods and the Crips. One just can't stomach the other. On contact one either kills the other or keeps it from reproducing and increasing its turf, the human body. This rumble dates back thousands of years to when concoctions with natural-antibiotic-packed ingredients like sour milk and turtle shell were used to turn the tide in corporal turf wars. The age of modern antibiotics started in 1926 when Alexander Fleming discovered that a fungal mold made penicillin and that penicillin could keep some kinds of bacteria at bay. Since then a bevy of antibiotics — some produced naturally and other synthesized — have prevented bacteria that cause tonsillitis, tuberculosis, gonorrhea, and many other maladies from making the human body a one-gang town.