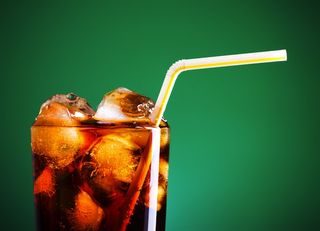 According to fruit flies, yes, carbonation has flavor, but people may not be able to taste it.
(Image: © Soda image via Shutterstock)

If you ask a fruit fly, the answer is an emphatic "yes!"

In a study in today's issue of the journal Nature, scientists found that fruit flies are attracted to the taste of carbon dioxide dissolved in water, or what we commonly call the fizz in soda.

The fruit flies use their nosy ability to find food in your kitchen, of course. Yeast and bacteria both produce carbon dioxide (CO2) when they feast, and the chemical dissolves readily in water.

A little moisture, some rotting fruit, and, well, you know what happens next.

Exactly how the flies discern which fruit to go after is not entirely known, but neurobiologist Kristin Scott of the University of California at Berkeley thinks it goes like this:

"Flies seek the right amount of rottenness," Scott explained. "If fruit is only half rotten, producing a little CO2, it's good; if too rotten, it gives off a lot of CO2 and is bad tasting. They seek a balance."

And it might be that humans can taste it, too. See, fruit flies contain similar versions of many human genes. That's why scientists study them so much.

"This research raises the question of whether people also may have the ability to taste carbon dioxide and perhaps other chemicals in food," said study team member James F. Battey of the National Institute on Deafness and Other Communication Disorders. "If this were found to be true, our sense of taste could be even more complex than we realize."

Currently, scientists recognize five tastes in humans: sweet, salty, bitter, sour, and umami (also called savory; it's the taste of glutamate). And there is considerable debate about the existence of a sixth taste receptor for fat, too.