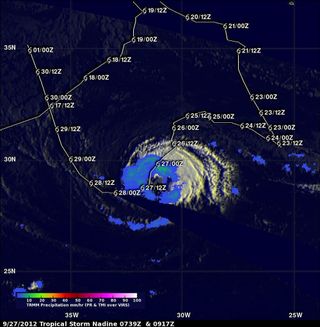 For the second time during its 18-day tenure, Tropical Storm Nadine has strengthened into Hurricane Nadine.

The storm currently has maximum sustained winds of 75 mph (120 kph) — just above the threshold for hurricane strength — making it a Category 1 hurricane. The storm also has a discernable central eye in satellite imagery, forecasters from the U.S. National Hurricane Center noted, a hallmark sign of a hurricane.

Nadine has been wandering around an area of the ocean near the Azores in the last couple weeks and currently lies 730 miles (1,175 kilometers) southwest of the islands.

Nadine first became a named storm on Sept. 11. (Storms in the Atlantic Ocean basin receive a name when they reach tropical storm strength). On Sept. 14, Nadine became a hurricane for the first time (making it the eighth hurricane of the 2012 Atlantic season).

On Sept. 21, the storm had diminished enough as it moved over cooler ocean waters that forecasters downgraded it to a remnant low pressure system (meaning it lacked the organization and strength to qualify as a tropical cyclone). But Nadine didn't stay down for long: As of the morning of the 23rd, it was a tropical storm again.

Nadine is moving toward the northwest right now and its strength is projected to remain about the same over the weekend, according to the latest NHC update, though by Monday it is expected to have weakened back into a tropical storm.

At this point in the year, the hurricane season is now typically on the wane, but storms have been known to form late in the season, and even after the season's official Nov. 30 end date.