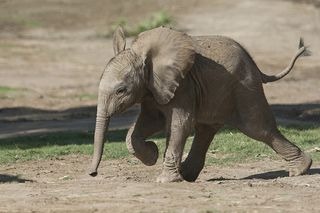 The calf's name is Qinisa, a Siswati word that means to act determinedly, act with energy, fulfill one's word or speak the truth. The name is pronounced "EEN-EE-seh," and the a tongue pop replaces the q sound. The name is very fitting, as the calf seems determined (successfully) to be developing faster than any of the 12 calves born to the Safari Park's elephant herd.

At only 1 week old, Qinisa was sucking water into her trunk and using her trunk to pick up objects like sticks sooner than the other calves. The calf has gained 40 pounds (18 kilograms) in her first 21 days of life.

The calf and her mom can be seen daily at the zoo's elephant habitat, via the Elephant Cam on the park's web site, or with the Safari Park iPhone app.   The Safari Park is now home to 13 elephants -- 4 adults and 9 youngsters. The adults were rescued in 2003 from the Kingdom of Swaziland, where they faced being culled. A lack of space and long periods of drought created unsuitable habitat for a large elephant population in the small southern African country. At the San Diego Zoo and the San Diego Zoo Safari Park, elephant studies are underway on nutrition, daily walking distance, growth and development and bioacoustic communication.