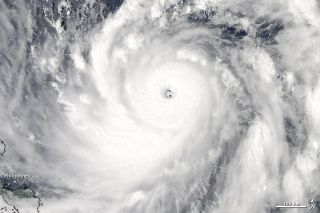 Between yesterday and today (Sept. 12 and 13), what was Tropical Storm Sanba exploded in strength to become Super Typhoon Sanba over the western North Pacific Ocean.

The Atmospheric Infrared Sounder (AIRS) instrument captured an infrared image of Sanba and found an eye about 20 nautical miles (23 miles/37 kilometers) wide, surrounded by a thick area of strong convection (rising air that forms the thunderstorms that make up the storm) and strong thunderstorms, according to a NASA release.

Sanba currently has maximum sustained winds of 155 mph (250 kph), making it a major Category 4 storm on the Saffir-Simpson scale of hurricane strength. (Hurricanes and typhoons are the same phenomenon, collectively referred to as tropical cyclones.) The storm is on the cusp of Category 5 strength, which officially begins at winds of 157 mph (252 kph). It's the strongest storm the globe has seen since August 2011.

Storms of Category 4 and 5 strength are called super typhoons in the western Pacific.

The storm could strengthen to a Category 5 over next 12 hours, though will then weaken slightly as it moves into less favorable waters and atmospheric conditions.

Sanba is currently 600 nautical miles south of Kadena Air Base, according to the latest update from the Joint Typhoon Warning Center (run by the U.S. Navy and Air Force). It is heading north toward the Korean Peninsula and Japan. It will likely make landfall over the weekend or early next week.