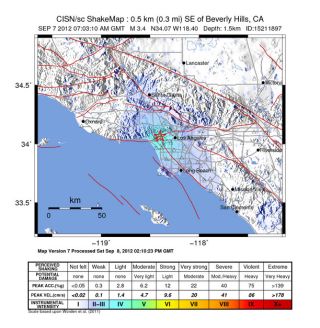 The intensity of the shaking from a magnitude-3.4 earthquake that struck Beverly Hills, Calif. on Sept. 7, 2012.
(Image: © USGS)

The relatively small earthquakes that struck Beverly Hills last week happened at the T-shaped intersection of two faults that are both capable of producing strong quakes.

A U.S. Geological Survey geophysicist told the Los Angeles Times that the 3.2 and 3.4 magnitude earthquakes occurred near the junction of the Santa Monica fault and the Newport-Inglewood fault.

Both faults are long, which means they are capable of producing powerful magnitude 7 earthquakes. Their seismic potential is of particular concern because the faults run through major urban areas of Los Angeles County.

The Santa Monica fault runs for 15 miles (24 kilometers) and travels under Santa Monica Boulevard. The Newport-Inglewood begins just off the coast at Orange County and runs for 47 miles (75 km) northwest through Long Beach, Inglewood and into West Los Angeles, the L.A. Times said.

The 1933 magnitude-6.3 Long Beach earthquake, which killed 115 people, occurred on the southern portion of the Newport-Inglewood fault. The death toll was second only to the devastating 1906 San Francisco earthquake in California history.

Earthquake scenarios run for both faults have estimated that many thousands of buildings could be damaged, according to the Times. Stronger quakes on these faults could also hamper airport and hospital functions.