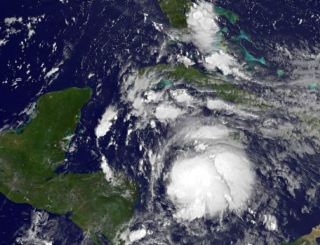 This visible image of Tropical Storm Ernesto was captured by NOAA's GOES-13 satellite on August 6 at 11:45 a.m. EDT. Ernesto was located south of central Cuba at that time.
(Image: © NASA GOES Project )

Tropical Storm Ernesto is churning its way across the Caribbean, with satellites and hurricane hunter aircraft keeping tabs on the storm and its strength.

Hurricane hunters flew into Ernesto this morning (Aug. 6) and found deep convection (rising air that forms the thunderstorms that make up a tropical cyclone), indicating that the storm was strengthening. NASA satellite measurements also indicate a strengthening storm.

Currently, the tropical storm has maximum sustained winds of 65 mph (100 kph). To become a hurricane, as it possibly could later tonight, the storm's winds will have to hit at least 74 mph (119 kph).

Tropical Storm Ernesto formed on Aug. 2 and dumped rain on the islands of the Lesser Antilles as it made its way westward. The storm is currently 160 miles (260 kilometers) east-northeast of Cabo Gracias a Dios on the border of Nicaragua and Honduras.

A tropical storm warning — meaning tropical storm conditions are expected in the area within 36 hours — has been issued for the coast of Honduras from the border with Nicaragua westward, according to the latest update from the U.S. National Hurricane Center. A hurricane watch has been issued for the entire coast of Belize and a hurricane warning for Chetumal to Punta Allen on the east coast of the Yucatan Peninsula.

Ernesto is expected to bring rains between 3-5 inches with isolated spots between 4-8 inches, which could cause flash floods and mudslides. Storm surge will also be a concern for coastal areas.

Ernesto is the fifth named storm of the 2012 Atlantic hurricane season and will be the second hurricane if it becomes one. Florence, which formed just after it, has weakened and become a post-tropical cyclone, meaning it no longer has the characteristics of a tropical cyclone but could still pack heavy rains and winds.

The National Oceanic and Atmospheric Administration will be issuing an updated forecast for the remainder of the 2012 season on Thursday (Aug. 9). August and September are typically the busiest months of the hurricane season.