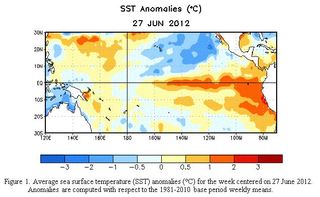 There's a greater than 50 percent chance that El Niño conditions will develop during the second half of 2012, the National Weather Service announced today (July 5).

When El Niño conditions are in place, water temperatures in the tropical Pacific are above average, which has far-reaching consequences for climate and weather patterns around the globe.

Based on the National Weather Service's prediction, the northern United States could be in for a warmer and drier winter than average, while the Southwest and Southeast could find itself with more rain than usual.

The prediction follows the end of a La Niña cycle – the counterpart of El Niño, with cooler-than-average surface waters – that has prevailed for much of the last two years.

The El Niño-La Niña climate cycle is referred to as ENSO.  The National Oceanic and Atmospheric Administration had expected "ENSO-neutral" conditions, in place since May, to last through the end of summer. However, updated computer models, accounting for continued warming in areas of the Pacific, prompted NOAA climatologists to forecast a 55 percent chance of El Niño developing between July and September. Between October and December, there's a 65 percent chance for El Niño conditions.

A weakening of low-level trade winds and convection over the central equatorial Pacific in the past month also represents a progression toward El Niño, according to the National Weather Service, a division of NOAA.

The La Niña cycle had a substantial impact on the extreme winter weather of 2010-11, as well as on last spring's terrible tornado season. La Niña conditions may have helped bring about some of the massive snows that blanketed much of the northern United States last winter, and the conditions' waning may have ramped up the tornado season.