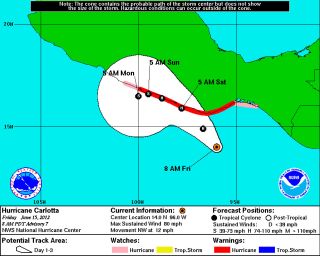 The projected path of Hurricane Carlotta, which is set to hit the west coast of southern Mexico.
(Image: © NHC/NOAA)

Tropical Storm Carlotta strengthened into a hurricane this morning (June 15) and is poised to rapidly strengthen further as it threatens the west coast of Mexico.

The storm is currently positioned about 120 miles (195 km) south-southeast of Puerto Angel and is moving to the northwest with maximum sustained winds of 80 mph (130 kph).

The center of the storm is expected to move near or over the coast of later today or early tomorrow.

Carlotta is currently a Category 1 hurricane on the Saffir-Simpson scale of hurricane strength, but is expected to strengthen more throughout the day and could become a Category 2 storm.

Hurricane hunters are en route to fly into the storm to take measurements, which help forecasters get a better picture of what is going on in the turbulent environment and make more accurate forecasts.

Carlotta could produce rainfall totaling between 3 to 5 inches (75 to 125 millimeters) over the Mexican states of Chiapas, Guerrero and northern Oaxaca, with 6 to 10 inches (150 to 25 mm) over southern Oaxaca. The NHC warns that these rains could produce flash floods and mudslides.