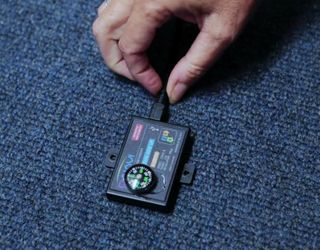 Scientists leading the "Quake Catcher Network" said in a statement that volunteers using in-home detectors would augment larger networks and expand  knowledge of how earthquakes work.

The in-home sensors can measure earthquakes of magnitude 2.5 and above. Roughly 3,000 Quake Catcher sensors have been installed around the world and have recorded earthquakes ranging from a 2.6 magnitude quake in New Zealand to the massive 8.8 earthquake off Chile in 2010.

Lightweight and about the size of a Post-It note, each sensor need only be attached to the floor and plugged into an Internet-connected computer to work. The sensors are free to those in target areas and cost $5 elsewhere. More details can be found at the Quake Catcher Network's website.

"This project is allowing anyone with an Internet-connected computer to help us explore the unexplored," said Debi Kilb, an associate project scientist at the Scripps Institution of Oceanography, in San Diego.

Volunteer-deployed sensors on different floors will help scientists and engineers understand how quakes affect buildings, knowledge that could be used to increase structures' earthquake resistance. The project also will help engineers monitor the response of the buildings to strong shaking from wind gusts, large-scale construction, traffic and other sources of vibrations.