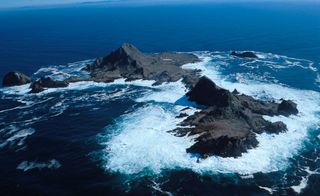 A new mapping tool has given scientists a first glimpse of an area of the seafloor just west of the San Francisco Bay and, thanks to a new animation, ordinary people can take a ride over the newfound and dramatic topography.

The newly mapped ocean floor lies within the Gulf of the Farallones National Marine Sanctuary, a protected area that spans 1,279 square miles (3,312 square kilometers) of the Pacific Ocean just northwest of San Francisco.

Thanks to a sonar mapping tool, scientists with the National Oceanic and Atmospheric Administration recently got a look at some unexplored areas of the sanctuary.

A video using data gleaned from sonar reveals dramatic ravines and canyons that plunge 4,000 feet (1,219 meters) into the deep ocean.

These dramatic cliffs and two other areas are garnering some of the most attention from scientists. These seafloor regions have been well mapped for the first time, and may prove to be home to a host of valuable ocean species.

"These are the first highly detailed images of these areas in our sanctuary," Jan Roletto, sanctuary research coordinator, said in a statement. "This area has promising potential as habitat for deep-sea corals and sponges."

Scientists are planning to revisit these areas in October 2012 to take even better measurements and better understand what creatures live there. They plan to use a deep-diving robot to explore the depths.

Some of the sanctuary's most famous residents don't require deep-diving robots to get a good look. Great white sharks crowd the waters around the Farallon Islands, a smattering of tiny, steep mountains that rise from the sea about 25 miles (40 km) west of San Francisco's Golden Gate Bridge.