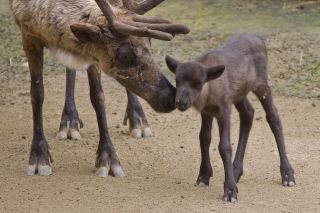 An attentive reindeer mother attends to her 10-day-old calf in this photo taken May 24 at the San Diego Zoo.

The young male is growing everyday and weighs about 15 pounds now, the zoo said in a statement. He shows spurts of energy, but is still a little wobbly on his legs.

The unnamed calf sticks close to his mother and mimics her behaviors, including chewing on solid foods. The calf is still nursing and appears to only be sampling foods like acacia leaves.

Reindeer (also called caribou) can be found in tundra, mountain and woodland habitats throughout North America, Europe and Asia. They have several adaptations that help them survive harsh climates, including a thick coat, big round feet that serve like snow shoes, and a great sense of smell that allows reindeer to find lichen and grasses beneath the snow.