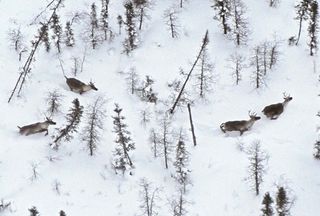 Reindeer populations have declined drastically in the past few decades. To stop the loses, the Wildlife Conservation Society and the Earth Rangers — a Canadian conservation group that works with children and families — launched the campaign, which is called "Bring Back the Wild — Save the Real Reindeer." The project will raise money to fund the WCS's efforts to protect caribou in northern Ontario's "Ring of Fire" region, home to a major mining exploration project.

"Woodland caribou — also known as reindeer — are among the world’s most beloved species, particularly this time of year," said Justina Ray, director of WCS Canada. "WCS is delighted to team up with Earth Rangers to engage kids to protect this living symbol of the holidays — and of northern wilderness."

Woodland caribou have declined by 40 percent over the past 150 years due to industrial development of the boreal forest. Future threats from climate change and increasing pressure to develop paint a bleak picture of the region.

The new campaign will fund the WCS's work to identify these new threats and find solutions. The work will include aerial surveys of the boreal forest that identify important caribou, and works on the ground to protect the boreal forest.