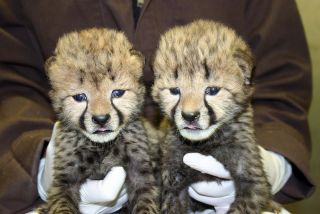 After a rocky start in the world, two three-week-old cheetah cubs were transferred to the Smithsonian National Zoo last week where they are being hand-raised and will debut to the public later this summer.

Five-year-old cheetah and first-time mom Ally gave birth to the first cub, a male, on April 23 at the Smithsonian Conservation Biology Institute in Front Royal, Va. Ally abandoned the cub instead of nursing and cleaning it, a common occurrence for first time cheetah moms under the care of humans, according to the zoo.

When Ally suddenly stopped having contractions hours later, SCBI head vet Dr. Copper Aitken-Palmer anesthetized her to see if she had additional cubs. She heard additional heartbeats and a radiograph showed that three more cubs remained. Aitken-Palmer performed a cesarean section, a procedure rarely used on cheetahs and one that cubs do not often survive. A team of veterinarians, keepers and scientists worked for three hours to resuscitate the three cubs, performing CPR, administrating medications and rubbing the cubs to dry and warm them. One of the three cubs, a female, did survive.

"Given how rare this procedure is, we thought it'd be unlikely for any of the cubs to survive," said Adrienne Crosier, SCBI cheetah biologist. "But that little female is a fighter. Once we got her breathing, she just kept going. It was a very intense, stressful experience, but among the most inspiring of my career."

"There are now two new genetically valuable cubs in a population that so desperately needs them," Aitken-Palmer said. "So this is really a success for this struggling species."

Ally and Caprivi were paired as a recommendation of the Association of Zoos and Aquariums' Species Survival Plan for cheetahs. The SSP matches animals across the country to ensure genetic diversity in the population. The mortality rate for cheetah cubs in the wild is about 70 percent, while it is only 20 percent for those under human care.

There are only an estimated 7,500 to 10,000 cheetahs left in the wild. Cheetahs are threatened by conflict with humans, hunting and habitat loss. The International Union for Conservation of Nature considers cheetahs a vulnerable species.