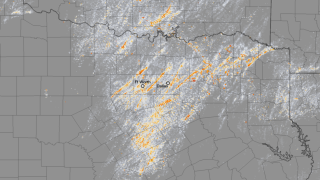 Radar data were processed by experts to produce this image of rotation in the area.
(Image: © NOAA. )

As a swarm of tornadoes barreled through the Dallas-Fort Worth area yesterday (April 3), National Weather Service radar captured the storms' signatures in the air high above the sprawling cities.

Although it's not yet confirmed how many tornadoes actually appeared — it can take days to narrow down reports of sightings that sometimes overlap — federal authorities received reports of 18 different twisters.

The above image, produced with radar data, shows the areas of heavy rotation yesterday in the colossal thunderstorms that hit the area.

By looking at how strong the rotation is, and where it moved over the course of the afternoon, forecasters can hunt down the areas in the storm system that likely produced tornadoes.

Some of the thunderstorms had a rotational velocity of 180 mph (290 kph).

Field survey teams have confirmed that the tornado outbreak produced at least one EF-3 tornado packing winds of 150 mph (240 mph), which hit near the town of Forney, Texas yesterday.

A storm chaser was in the area, and caught terrifying video of a large tornado in action — possibly the EF-3.

The devastating April 3 tornado outbreak was not unusual, meteorologists said, yet because it swept through such populated areas, it did terrible damage.