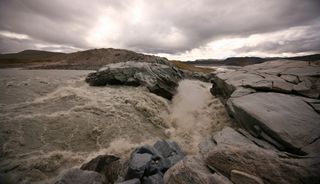 The waterfall site at which the meltwater draining from Leverett Glacier was monitored.
(Image: © Andrew Sole)

Ice sheets may be eroding the bedrock sitting beneath them up to 100 times faster than has been thought, rapidly altering landscapes, a team of scientists finds.

The scientists made their finding by measuring the volume of rocky debris washed out from beneath a 200-square-mile (600 square kilometers) region of Greenland's ice sheet over a two-year period –  scary work that saw them lose several sensors to the strong current of the meltwater.

Glaciers, the rivers of ice that make up ice sheets, have dominated up to a third of the land's surface over the past 2 million years and have often behaved like giant, relentless bulldozers, leveling mountains and carving deep fjords as they slide across the land. Though it was known that these icy behemoths operated on geologic timescales of thousands to millions of years, the exact rate at which they eroded landscapes has been uncertain.

One way to understand how glaciers sculpt the land is to study the modern Greenland ice sheet. A huge volume of meltwater drains through cracks in the ice and flows along the sheet's bed, carrying debris with it. The debris comes from the ground scraped by the ice sheet and by rock stuck in the ice itself as it moves.

The site they monitored can be "quite a scary place to work, because there's this huge, powerful river raging past whilst you're trying to manhandle and position sensors at the water's edge," said researcher Tom Cowton, a glaciologist at the University of Edinburgh in Scotland. "We actually lost a few sensors last year when the river rose 2 meters [6 feet] in the space of a few hours and washed them away." [See the study glaciers .]

The team found the amount of washed-out debris equated to the removal of a layer of bedrock a fifth of an inch (half a centimeter) thick from the region annually – 10 to 100 times greater than previous estimates of the ice sheet rate of erosion.

The finding, which appeared online March 2 in the journal Geology, could have implications for scientists' understanding of how various landscapes on the planet came to be and when they were formed.

"If we look at former ice sheet beds, which cover vast areas of the Northern Hemisphere, we can see that past ice sheets were clearly capable of eroding on an impressive scale, because they have produced dramatic landscapes like the fjords of Norway. But what these new findings suggest is that these landscapes may have required much less time to form than previously assumed, which is important to know if you are trying to reconstruct the environmental history of a region," Cowton said.

This surprisingly rapid erosion might be due to the flushing effect of the meltwater, which removes debris and exposes fresh bedrock to the destructive force of the ice. The findings suggest the eroding power of ice sheets is most effective during periods of climate warming, when melting is at its greatest.

"Once we started getting the results back on the amount of sediment being transported out from beneath the ice sheet, it became clear that there was an awful lot of erosion going on," Cowton said. "Where conditions are right in the marginal zone of the Greenland ice sheet, stretching perhaps 50 to 100 kilometers [30 to 60 miles] inland from the edge of the ice, the ice sheet is actually quite rapidly modifying the underlying terrain."

Future research can look at extremely large, extremely fast-flowing glaciers in Greenland that end in the sea, and not away from the coast as the one Cowton and his colleagues investigated, to see whether they also erode bedrock this quickly.

"If they are flowing twice as fast as the land-terminating glaciers, are they eroding twice as rapidly? Or are they sliding along on a thick layer of deforming sediment that in fact prohibits erosion of the underlying bedrock?" Cowton said.

"The problem with marine-terminating glaciers is that they are notoriously difficult to access, because the fjords in which they terminate are generally choked with a mess of icebergs and sea ice," he added. "It's extremely difficult to get close to the glacier front where the bulk of sediment is being deposited."

Scientists could use other means to monitor these types of glaciers, though, Cowton said.

"One approach that is currently being pursued is looking at marine sediment plumes around the coast of Greenland using satellite imagery," he said.