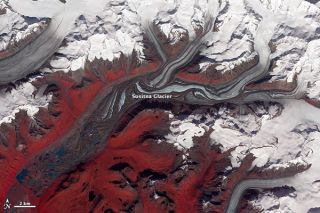 Like liquid water, glaciers flow downhill, forming tributaries and larger rivers, but while water rushes, ice crawls. As a result, glaciers gather dust and dirt, and bear long-lasting evidence of past movements.

This becomes very clear in this false-color image of Alaska's Susitna Glacier taken by NASA's Terra satellite as it passed overhead on Aug. 27, 2009.

The image combines infrared, red, and green wavelengths to form a false-color image. Vegetation is red and the glacier's surface is marbled with dirt-free blue ice and dirt-coated brown ice. The glacier surface is especially complex near the center of the image, where a tributary has pushed the ice in the main glacier slightly southward.

Susitna Glacier is the starting point for the Susitna River, a 313-mile- (504-kilometer-) long river that flows from the glacier down into Cook Inlet, which stretches some 180 miles (290 km) from the Gulf of Alaska to Anchorage.

The glacier itself flows over a seismically active area. In Nov. 2002, a 7.9-magnitude quake struck the region, along a previously unknown fault. While this led geologists to believe that's how the features of Susitna were created, most of the jumble is actually the result of surges in tributary glaciers.

Glacier surges occur when melt water accumulates at the base and lubricates the flow of the glaciers, causing them to move faster than they would normally. This water may be supplied by melt water lakes that accumulate on top of the glacier. In addition, the underlying bedrock can also contribute to glacier surges, with soft, easily deformed rock leading to more frequent surges.