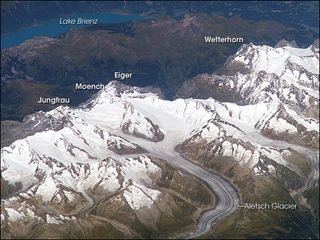 This astronaut photograph, taken on Sept. 5, 2006, shows an oblique view of the Bernese Alps in southern Switerland.
(Image: © NASA)

The Bernese Alps are the portion of the great European mountain range located in southern Switzerland near the canton of Bern.

An astronaut took this picture by looking north-northwest while the International Space Station was over the Mediterranean Sea between Corsica and Italy. The oblique angle of the image, a hallmark of astronaut photographs , shows off the rugged glacial landscape.

To the east and south of the Jungfrau is the Aletsch Glacier, clearly marked by dark medial moraines extending along the glacier's length parallel to the valley axis. The medial moraines are formed from rock and soil debris collected along the sides of three mountain glaciers located near the Jungfrau and Moench peaks. As these flowing ice masses merge to form the Aletsch Glacier, the debris accumulates in the middle of the glacier and is carried along the flow direction.

Lake Brienz to the northwest results from the actions of both glacial ice and the flowing waters of the Aare and Lütschine rivers.