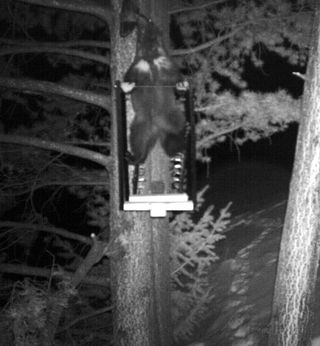 This picture of an elusive wolverine was taken in a camera trap in Montanta by a conservation group studying the rare and threatened creatures.
(Image: © Robert Inman, WCS North America Program)

Spotting a wolverine in the wild is a rare feat, as the numbers of these elusive creatures have dwindled with pressure to their habitats. But conservationists with the Wildlife Conservation Society were able to snap a picture of one wolverine as it reached for the bait of a camera trap placed in a tree in Montana.

The camera trap was part of an eight-year study of wolverines in the Greater Yellowstone Ecosystem that has led to a better understanding of wolverine ecology and will help inform conservation strategies so that this rare species can survive in the 21st century, the WCS said in a statement.

The frame upon which the animal climbs is designed so that the unique markings on the underside of the wolverine are revealed to the motion-sensing camera. Scientists use these markings to identify individual animals and document their distribution and range.

An estimated 250-300 wolverines remain in the "lower 48," where they occupy about half of their former range in high alpine peaks of the western United States.

Another wolverine was recently spotted scampering over a "wildlife overpass" in Canada's Banff National Park. These overpasses allow wildlife to more easily reach parts of its habitat that would normally be cut off by highways.