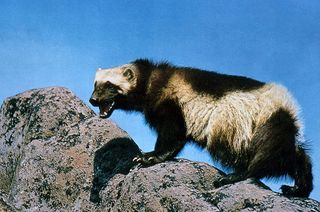 A wolverine hangs out on some rocks.
(Image: © NPS)

After 15 years of looking left, then right, then left again, a wolverine has finally made its run across the Trans-Canada Highway.

The wolverine didn't run through traffic. The critter was caught by a wildlife camera while scampering over a special "wildlife overpass" along a stretch of highway in Banff National Park. The brave wolverine made the first recorded crossing of a wolverine overpass in the 15 years since they were built, reported the Rocky Mountain Outlook. The system of multimillion-dollar overpasses was built over the highway to reduce wildlife deaths.

"We've had wolverines using the underpasses before, but never an overpass, and any time a wolverine crosses the highway is big news," Trevor Kinley, a Parks Canada wildlife biologist, told the Rocky Mountain Outlook.

The overpasses let different populations of wolverines interbreed and provide access to parts of their habitat that were previously cut off by the highway.

Wolverines in Banff are rare and their populations are spread out through the forest. They are known to roam large distances in their home territories, so sighting one is uncommon, making it a challenge for biologists studying the population's health.

Wolverine crosses may be rare, but 2011 saw more than 200,000 crossings on overpasses and underpasses by wildlife, including grizzly and black bears, wolves and ungulates, such as deer.