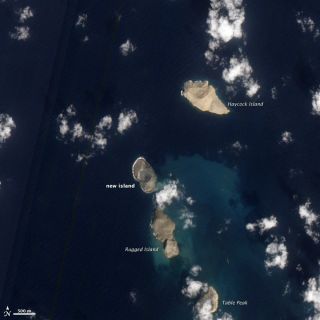 The newest inhabitant of the Red Sea — a volcanic island — seems to have stopped smoking last week, and could be here to stay.

A volcanic eruption in the Red Sea left behind a newborn island that is part of the Zubair Islands, located about 40 miles (60 kilometers) off the coast of Yemen. A NASA satellite image of the new island, acquired on Jan. 15, showed no signs of smoke. But it's hard to say for sure if the eruptive fit is finished, or if this is just a break in the action.

"Without a lot of monitoring equipment out by the new island, this is hard to tell," said Erik Klemetti, a volcanologist at Denison University in Granville, Ohio.

Volcanologists look for eruption indicators such as small earthquakes, deformation of the land surface, carbon dioxide and sulfur dioxide emissions, otherwise, "we have no real way of knowing if this is just a break in the action or that the eruption is done," said Klemetti, the author ofWired's Eruptions Blog.

If it is a break, it could last days, weeks, months or even years.

"Watching it with satellites will likely be our best way to tell if the eruption is done or just taking a break," Klemetti told OurAmazingPlanet.

A wild eruption earlier this month created the island. According to news reports, fishermen witnessed lava fountains reaching up to 90 feet (30 meters) tall on Dec. 19, which is likely the day the eruption began. There was some discussion about whether or not it would wash away, but that depends on erosion. Will the Red Sea erode the new island due to wave action or storms?

"If the island is mostly lava flows — as it seems to be — rather than ash or loose volcanic debris, then it will likely resist erosion." Klemetti said. "If not, the island may erode to below the sea surface unless new lava is added."

If the island is here to stay, it'll need a name. But that will probably be left up to whichever country claims it first.