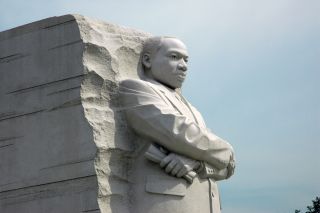 Captured in a moment of reflective thought, the figure of Dr. Marin Luther King Jr., sculpted by renowned artist Master Lei Yixin serves as the forward element of the Stone of Hope.
(Image: © NPS)

Looking for something outdoorsy to do over the long weekend? How about visiting a national park — for free.

Several parks and national monuments have direct ties to Dr. King and the Civil Rights movement, including: the Martin Luther King Jr. National Historic Site in Atlanta, which features King's birth home; the Selma to Montgomery National Historic Trail in Alabama, which commemorates the 1965 Voting Rights March; and the Lincoln Memorial in Washington, D.C., where King gave his famous "I Have a Dream" speech during the March on Washington for Jobs and Freedom in 1963.

These and other parks, including the new Martin Luther King Jr. Memorial in Washington, D.C., will be holding special events to honor King.

"Dr. King led the fight to realize his dream of a nation free of discrimination, where every citizen was able to enjoy the inalienable rights promised to all Americans," National Park Service director Jonathan B. Jarvis said in a statement. "Dr. King's story and those of so many others whose efforts changed our country are preserved in the national parks, places where history happened. I hope every American can take advantage of the upcoming fee-free weekend and visit their parks to experience their history firsthand."

Winter can be an especially good time to see some national parks; it's a great time of year to view the bison at Yellowstone National Park or go whale watching at Point Reyes National Seashore in California.