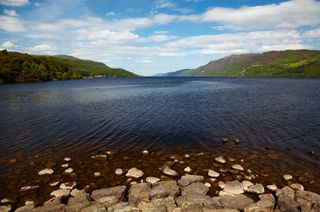 Loch Ness is best known for its eponymous monster, but now scientists have made another discovery regarding the Scottish lake — its tides can be used to track the warping of the planet.

The rise and fall of the tides are primarily driven by the gravitational pull of the moon and the sun. However, researchers find that tides at Loch Ness are controlled not just by the heavens, but by terrestrial factors as well.

Loch Ness lies 8 miles (13 kilometers) inland from the North Sea. The "astronomical tide" from the heavens shifts the weight of the waters of that sea enough to deform the seafloor. This causes the surface of the Earth to rise and fall, a phenomenon known as ocean tidal loading.

Using pressure sensors distributed throughout Loch Ness, the scientists measured the height of the water over the course of 201 days in 2010.

"No sign of a monster, though one instrument was lost — maybe a monster got it," joked researcher David Pugh, a geophysicist and oceanographer at the National Oceanography Center in Liverpool, England.

After factoring out the direct astronomical tide, the researchers found the shift in the shape of the Earth triggered by the North Sea also influenced the loch's tide, much as an unstable table would tilt the water level in a bowl sitting atop it.

This tide has a magnitude of just 0.06 inches (1.5 millimeters) over the loch's approximately 23-mile (37-km) length. This measurement was made to an accuracy of 0.004 inches (0.1 mm), a level of sensitivity exceeding what can be achieved using the global positioning satellite (GPS) network, researchers said.

Similar experiments conducted at lakes worldwide could help promote better understanding of this phenomenon. In principle, one could learn about the structure of the Earth's crust by observing how it responds to such forces.

Still, "existing models of the Earth's structure are consistent with our exceptionally accurate measurements, which could not therefore, alas, point to new models of structure," Pugh told OurAmazingPlanet. "Existing understanding of the Earth's crustal structure is still better than our ability to measure crustal tilts."

Pugh and his colleagues Philip Woodworth and Machiel Bos detailed their findings in the Journal of Geophysical Research-Oceans.