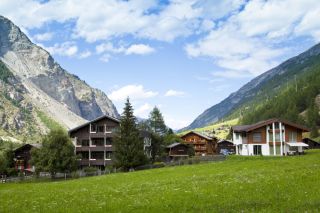 Strong earthquakes may fracture bedrock in a way that amplifies shaking during subsequent seismic events, increasing the chances of future rockslides and other quake-linked hazards, researchers find.

Loose soils are known to amplify shaking and damage from earthquakes in a process called liquefaction, where the ground takes on a soupy character. Seismic waves moving through bedrock slow down as they enter soil, but since their overall energy is conserved, the waves become stronger and deadlier.

Bedrock, on the other hand, is generally not thought to  amplify seismic waves, remaining much more stable. However, new findings in the most seismically active part of Switzerland are undermining this notion.

Scientists investigated ground motions during small earthquakes at a large unstable rock slope about 175-million-cubic feet (5-million-cubic meters) in volume at Randa, Switzerland. The area is home to strong magnitude-6-or-larger earthquakes every century or so that invariably cause landslides.

Seismometers measuring vibrations of the earth there revealed that fractured rock could amplify ground motion by up to a factor of 10 compared to more-solid adjacent bedrock.

"Rock is normally considered to be stable with respect to seismic amplification, but here we show that this is not always the case," researcher Jeffrey Moore, an engineering geologist at the Swiss Federal Institute of Technology in Zurich, told OurAmazingPlanet.

One key to understanding why the fractured rock intensifies shaking is that the kind of fractures considered in this study are compliant ones, meaning they close or open easily when pressure is placed on or removed from their walls. They break the rock into compartments — at Randa, these are typically rectangular blocks that are long and deep but not very wide, "something like 100-by-50-by-10 meters [330-by-165-by-30 feet], almost like a magazine standing up vertically and turned on its side," Moore said.

When these blocks are shaken at their base, they shake easily in one direction, the side of the slope exposed to air. As such, motion at the surface is greatly amplified, Moore explained.

These results give scientists new tools to help evaluate seismic hazards in steep regions — that is, ones dominated by steep rock slopes, Moore said. Earthquake-triggered landslides in such regions "are typically among the most damaging secondary effects of large earthquakes," he explained.

The scientists hope one day to capture how this unstable rock slope behaves before and after a strong earthquake, to test their theories.

"Our measurements are for weak, low-strain earthquake motions, meaning we don't and can't yet know how our slope will respond under strong ground motion," Moore said. "The amplification results may be similar, but they may also change — we could see greater amplification, but also attenuation is possible."

The researchers detailed their findings in the December issue of the Bulletin of the Seismological Society of America.