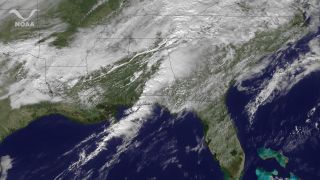 The line of severe thunderstorms moving through the Deep South was captured by a satellite.
(Image: © NASA/NOAA)

ATLANTA – Dark, low and fast-moving clouds swirled overhead, accompanied by crackling thunder – spooking this reporter's dog – as the most severe weather since the spring tornado season rolled through the Deep South yesterday (Nov. 16).

Strong winds and reported tornadoes downed trees and power lines, killing six people across South Carolina, North Carolina and Georgia, according to the National Weather Service. This tornado-prone region, known as Dixie Alley, is home to some of the deadliest twisters in the country. More than 300 people died across the region in a late April outbreak.

"Yesterday was one of the biggest outbreaks since April," said Kevin Laws of the NWS office in Birmingham, Ala.

Across the country, 548 people had been killed by 56 tornadoes in 14 states through last week, according to the National Oceanic and Atmospheric Administration, making 2011 one of the most active and deadly tornado years in U.S. history.

Just outside Atlanta yesterday, a meteorologist at the Weather Channel headquarters captured a photo of a small tornado. Throughout the day, the nation's Storm Prediction Center logged 17 tornado reports, stretching from Mississippi to North Carolina.

Mississippi saw some of its biggest twisters since late April, said meteorologist Jared Allen with the National Weather Service in Jackson, Miss. A tornado that touched down in southeast Mississippi was an EF-2 on the Enhanced Fujita tornado damage scale, with winds up to 130 mph (209 kph). The twister was on the ground for 12 miles (19 kilometers), and 15 people were injured during the storm. Two other, smaller tornadoes were confirmed in Mississippi.

"We've got another survey team out there today looking for more," Allen told OurAmazingPlanet.

In Alabama, storm survey teams have so far found two separate tornado paths. The tornado that touched down near Montgomery was rated an EF-2, and farther west, near the Mississippi border, an EF-0 tornado caused minor damage to about 20 houses. Near Auburn University in eastern Alabama, severe winds rocketed debris down streets, with some of the scenes caught on video. Survey teams in southeast Alabama are still working through the damage, but "it's starting to look like it might be some pretty good tornadic activity," Laws said.

Here in Georgia, a reported twister hit a high school hard. North of Atlanta, one man was killed when a tree fell on his car.

"From a damage standpoint, not too bad," said Brian Lynn of the NWS office in Peachtree City, Ga., on how the state fared. "From a loss of life standpoint, terrible."

Storm survey teams are continuing to study the damage scenes today to determine the size of all the reported tornadoes.

The big outbreak was caused by "moist air ahead of a cold front, plain and simple," Lynn said, and these kinds of thunderstorms are expected this time of year — the so-called second tornado season — in the Southeast.

Tornadoes can strike virtually anywhere and anytime in the United States, and November is a particularly big month for twisters in the Southeast. Fall and spring are both transitional periods, when masses of warm and cool air are more likely to collide and create the thunderstorms that spawn tornadoes.

During this time of year, when the daylight hours are shorter, nighttime tornadoes, which can be particularly deadly, are a big risk. November has averaged four tornado-related fatalities per year since 1950, making it the deadliest tornado month of the late summer and fall, according to the Storm Prediction Center.