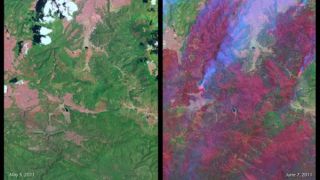 The scars left on the land by the intense Wallow Fire in Arizona can be in these before-and-after satellite images of burn area.

Imagery from the Landsat-7 satellite shows two glimpses of the same area: one taken on May 5, 2011 and the other on June 7. In the image from May 5, green areas indicate healthy vegetation and grasslands, light pink areas are naturally occurring rock or bare land. In the image from June 7, the red color indicates burned areas.

In some cases, "hot" pink colors can also be seen along with smoke - these are active fire areas.

The Arizona wildfire broke out in the Apache-Sitgreaves National Forest in Greenlee County on the afternoon of May 29. The fire has burned some 500 square miles (1,300 square kilometers, or 389,000 acres) about 10 times the size of Manhattan in New York City.

The smoke from the fire has drifted across several states, including Wyoming, Nebraska, Kansas, Oklahoma, Texas, Colorado and New Mexico. Smoke has even been reported as far east as Iowa and the U.S. Air Quality "Smog Blog" said that smoke from the Wallow Fire pushed air quality to unhealthy levels as far east as Alabama and Georgia.