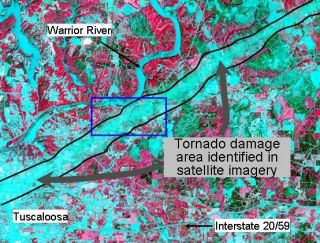 For a unique look at the monster tornado that ripped apart Tuscaloosa, Ala., last month, NASA called on one of its special satellites to track the aftermath of a tornado outbreak for the first time.

The image traces the damage of an EF-4 tornado, the second-highest rating on the tornado damage scale , which tore through the college town on April 27.

In the picture, captured just days after the storm, pink represents vegetation and aqua is the absence of vegetation. The tornado ripped up everything in its path, scouring the Earth's surface with its winds of up to 200 mph (322 kph). The "tearing up" of vegetation makes the tornado's track stand out as a wide swath of aqua.

"This image and others like it are helping us study the torn landscape to determine just how huge and powerful these twisters were and to assess the damage they inflicted," said NASA meteorologist Gary Jedlovec of the Marshall Space Flight Center in Huntsville, Ala.

To detect the scars left by the twisters , the NASA ASTER satellite, short for Advanced Spaceborne Thermal Emission and Reflection Radiometer, senses the visible and infrared energy reflected from the planet's surface. Destruction that shows crushed houses, torn and snapped trees and uprooted crops are evident in the multi-wavelength images.

"A demolished house, debris and soil scattered on vegetated surfaces, and damaged trees and crops all change the pattern of reflected radiation measured by the satellite," Jedlovec said. "We can analyze these patterns to help storm survey teams evaluate the damage."

Ground teams conducting field surveys of tornado damage must try to pinpoint where the twisters touched down, how long they stayed on the ground, and the force of their winds. But some places are nearly impossible to reach by foot or car. Also, in remote areas, damage often goes unreported, so survey teams don't know to look there. This is where satellites can help.

The satellite's sensors can detect damage in rural areas, wilderness areas and other unpopulated areas, which allows surveyors to determine the true track of a tornado, Tracing a tornado's path could also help scientists learn how these storms form and move so that meteorologists can improve warnings.

Jedlovec and colleagues are working to produce satellite images of other areas ravaged by the historic outbreak of tornadoes.