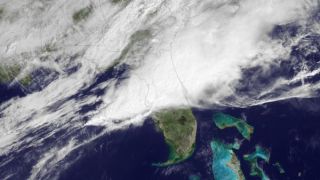 Central Florida was hit with these dangerous rain-wrapped tornadoes today (March 31) as severe storms swept through the region, according to the national Storm Prediction Center. Rain-wrapped tornadoes are twisters that are cloaked by heavy rains and thunderstorms. In other words, you can't see them. [In Images: Storm-Chasing Scientists .]

"When a storm has a lot of heavy rain wrapped around, it curtains the tornado," said Bob Henson, a meteorologist with the University Corporation of Atmospheric Research in Boulder, Colo.

That makes it even more difficult for meteorologists to alert those that are in harm's way, since "residents may not see the tornado in time to take proper precautions," said Amy Godsey, Florida's state meteorologist, in an email.

Felt, but not seen

Today's tornadoes may have been invisible , but the damage they caused was not. Trees were snapped, cars were smashed and strong winds flipped small airplanes that were on the ground at an airport, according to news reports. So far, no fatalities have been reported. Florida's last killer tornado was in 2008.

Florida averages the third most tornadoes per year in the United States, with about 55 annually, according to the National Climatic Data Center.

Weather radars are not much better at spotting rain-wrapped tornadoes than people yet. Doppler radars can see tightly rotating storms, but they can't confirm a tornado has touched down. Storm spotters can see the touchdown, but they can't see the rotation if it's hidden by rain.

A new upgrade to NWS radars should fix that blind spot. By 2012, all of the nation's Doppler radars will be upgraded with dual polarization technology, allowing them to see the debris that is kicked up when a tornado touches down.

Say a tornado is swirling debris such as grass, leaves and twigs a sign that a funnel cloud has touched down. If the debris is within 60 to 75 miles (97 to 120 kilometers) of dual-pol radar, meteorologists will be able to see it, and can then warn the public that a tornado is on the ground even if the tornado is cloaked by rain.