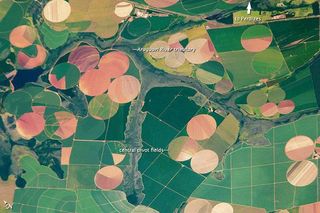 The diverse agricultural landscape in the western part of Minas Gerais state in Brazil can be seen in this astronaut photograph taken aboard the International Space Station.

Though most widely known for its mineral wealth, Minas Gerais is also a large agricultural producer for Brazil, according to a NASA statement.

The fields in this image are located southwest of the city of Perdizes, which means "partridges" in Portuguese. A mix of regularly-gridded polygonal fields and circular center-pivot fields marks the human use of the region.

Small streams (and their adjacent floodplains) of the Araguari River extend like fingers throughout the landscape.

The visual diversity of the field forms is matched by the variety of crops: sunflowers, wheat, potatoes, coffee, rice, soybeans and corn are among the products of the region.

Fallow fieldsnot in active agricultural usedisplay the violet, reddish, and light tan soils common to this part of Brazil. Darker soils are often rich in iron and aluminum oxides, and are typical of highly weathered soil that forms in hot, humid climates.