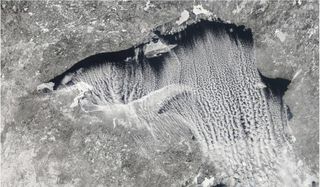 According to a scientist at the University of Wisconsin, the droplets that make up these cloud streets are shrinking, and they aren't quite sure why.

Cloud streets are exactly what they sound like parallel lines of cumulus clouds that form when cold and dry winds blow across a warmer body of water. Cloud streets can be seen by satellites over the Great Lakes and off the East Coast.

Atmospheric scientist Steve Ackerman, of the University of Wisconsin in Madison, analyzed NASA satellite photos of cloud formations over Lake Superior and noticed that over time these clouds streets start small and grow and thicken as they get higher in the Earth's atmosphere.

But in his study, Ackerman noticed something odd: The cloud droplets the small water droplets that make up clouds were shrinking as they moved across the lake.

Ackerman was puzzled, and told NASA in an interview that "we have no idea why they'd do that. They should be getting progressively bigger as they move across the lake and pick up moisture."

Cloud droplets start off around 5 microns in diameter 20 times smaller than the width of a human hair and grow to 20 microns. The satellite images showed the droplets are shrinking to 10 microns about four hours after forming.

As the scientists scanned NASA satellite photos, they found similar shrinking droplets only 15 times in the five-year span that they studied; all the other times, the droplets got bigger as expected.

Ackerman said that scientists don't really know why the droplets are shrinking, and said that dry air coming in from above is one suspect.

"That is definitely an explanation," said Mary Barth, who models clouds at the University Corporation of Atmospheric Research in Boulder, Colo., and isn't involved with Ackerman's work.

Clouds are a humid environment, Barth told OurAmazingPlanet, and so if they come into contact with dry air, then those drops would evaporate.

Ackerman said their next step is to develop a model that can recreate this unusual event to further explain the shrinking.