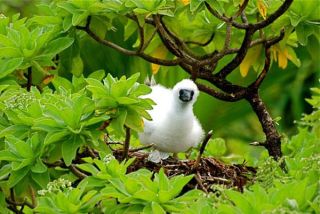 A red-footed booby chick rests in its nest on Palmyra Atoll in the South Pacific.
(Image: © Nigella Hillgarth)

Red-footed boobies, like this chick resting in its nest on Palmyra Atoll in the South Pacific, are hard to catch glimpses of, as they usually only make appearances on land to breed.

These birds spend most of their lives at sea, usually alighting on coral atolls and tropical islands, like those of Hawaii, when it is time to breed. During mating season, the birds live in colonies of hundreds of individuals.

Females lay only one egg every 15 months, but the young mature slowly, and the bird's low reproduction rate is balanced by a long lifespan, which can last over 20 years, according to National Geographic.

The species' eye-catching red feet have earned them the name the red-footed booby (Sula sula), but these birds can appear in an array of colors , ranging from individuals that are all white except for some black on the wing, to individuals that are entirely dark brown.

The red-footed booby is the smallest of the boobies, with an average length of 28 inches (71 centimeters) and a wingspan of 4.5 feet (1.37 meters). Despite their smaller stature, red-footed boobies are strong flyers, they have been known to travel up to 93 miles (150 kilometers) in search of food, according to the Cornell Lab of Ornithology.

Red-footed boobies are also known for their skill as fishing birds. They are well-adapted for diving, with their long bills, aerodynamic bodies, closeable nostrils and long wings that they wrap around themselves before entering the water. They have even been seen grabbing jumping fish out of the air.

Human poaching and interference has resulted in large declines in populations over the last 200 years. The birds are commonly taken as food, and their habitats are destroyed in the course of increased coastal development, according to National Geographic. In addition, red-footed boobies have had more and more trouble finding adequate food sources as the fishing industry thins out the fish populations they rely on.