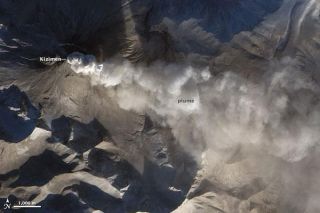 Kizimen Volcano on Russia's Kamchatka Peninsula sent a plume toward the west-southwest on January 6, 2010, according to a NASA statement. The Advanced Land Imager (ALI) on NASA's Earth Observing-1 (EO-1) satellite captured this natural-color image the same day.

Low-angled sunlight illuminates the southern face of the plume, leaving the northern side in shadow.

The plume's beige color suggests that its visible components are a mixture of volcanic ash and water vapor. The slopes of Kizimen and the nearby land surfaces appear dull gray-brown, likely resulting from a coating of volcanic ash. (A wider view of the region shows areas father from the volcano blanketed in snowy white.)

On January 7, 2011, the Kamchatka Volcanic Eruption Response Team reported that Kizimen had released continuous ash emissions since December 31, 2010 . Most of the ash clouds remained below the altitude of 6 to 8 kilometers (20,000 to 26,000 feet) although stronger, higher-altitude eruptions could occur at any time.

Reaching an elevation of 2,376 meters (7,795 feet), Kizimen is a stratovolcano composed of alternating layers of ash, lava, and rocks thrown out by previous eruptions.

Geologists estimate that the volcano formed about 12,000 years ago. Kizimen experienced an explosive eruption in 1927 and 1928.