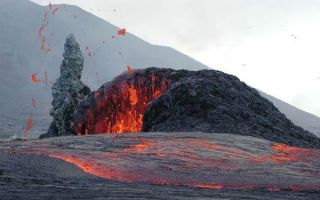 A postcard from the deep: Basaltic lava erupts from a vent on Kilauea Volcano, Hawai`i. Scientists hope that clues in the material spewed from volcanoes will reveal what goes on in the Earth's interior.
(Image: © Photo by C. Heliker, USGS.)

The processes that churn away inside the Earth's interior are notoriously difficult to study, buried under all that rock, and so remain largely mysterious.

Yet scientists have learned a lot by looking at the material that travels down into the Earth's crust (giant pieces of the seafloor, shoved deep by tectonic action), and what comes back out (rock spewed from volcanoes).

By studying these two sides of the geological equation, researchers have established that there is some cycling of material from the Earth's surface to the interior and back again. However, debate continues about how exactly the process works and how far it goes. Essentially, is the surface world affecting the Earth's roiling insides?

Yes, says Katherine Kelley, an assistant professor at the University of Rhode Island, who presented research on the topic Monday (Dec. 13) at the 2010 fall meeting of the American Geophysical Union in San Francisco.

Kelley studied lava from an island volcano in the western Pacific near Guam. By analyzing tiny olivine crystals in the once-molten rock that was hurled up from the Earth's mantle the layer of solid but hot rock that flows below the planet's crust Kelley discovered tell-tale fingerprints of the surface world: a certain brand of oxygen that originates above ground.

Some scientists, using different methods, have found evidence that the surface world and the Earth's interior essentially stopped talking to each other billions of years ago, when the Earth was first forming.

Their research indicates oxidation is occurring as material moves up, on its way out of the Earth's mantle meaning the mantle's composition isn't noticeably affected by the massive plates that descend, over millions of years, into the crust.

It could be that both parties are right, said Paul D. Asimow, a professor of geology and geochemistry at the California Institute of Technology.

"Picture the Earth's interior as a factory," Asimow told OurAmazingPlanet. An oceanic plate goes in one end, lava comes out the other "and there are a lot of assembly line steps in between."

Asimow said Kelley's work shows the final product is oxidized. Just where within the mysterious interior this process occurs is difficult to pinpoint.

Ideally, Asimow said, researchers will someday be able to compare the composition of rocks from across millions and millions of years. If there is an evolution in their chemical composition that correlates with what we know about how the Earth digests tectonic plates, that could be an invaluable clue about how much interaction goes on between the surface world and the globe's shifty interior.

Although those results aren't likely to surface soon, Asimow said, Kelley's work supports a very interesting idea: "that life that evolved on the surface of the Earth has had some effect on the composition of the planet."