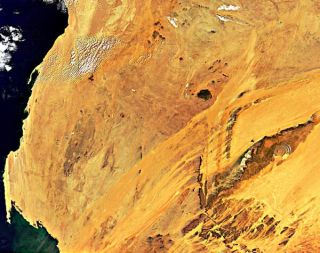 This Envisat image shows a geological phenomena in the Sahara Desert of Mauritania in northern Africa: the remarkable circular Richat structure, which resembles an eye from space. Credits: ESA

The 'Eye of Africa', a geological phenomenon in the Sahara Desert of Mauritania, a country in northern Africa, peers up in this satellite image.

The Richat structure, as it is also known, resembles a bull's-eye peering out of the sand . The structure is 30 miles (50 kilometers) in diameter, large enough in the featureless Sahara that the earliest space missions used it as a landmark.

Originally it was believed that the eye was formed by a meteor impact , now it is believed to be the result of geological uplift that has been exposed over time by wind and water erosion.

A plateau of sedimentary rock forms the darker region surrounding the Richat structure. This plateau stands roughly 656 feet (200 meters) above the surrounding sand.

In addition to the eye, Mauritania's highest peak can be seen in this image. The Kediet ej Jill Mountain is a magnetic mountain standing almost 3,281 feet (1,000 m) high. It appears blue because it is composed entirely of magnetite, a natural magnetic substance.

This shot was taken on Nov. 1 by the European Space Agency's Envisat satellite.