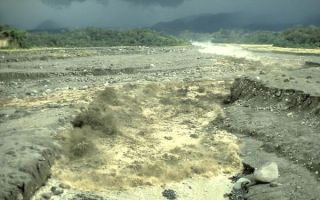 Mount Merapi's eruptions caused lahars. Lahar is an Indonesian word for a rapidly flowing mixture of rock debris and water that originates on the slopes of a volcano. Lahars are also referred to as volcanic mudflows or debris flows.
(Image: © J.N. Marso/USGS.)

Just because a volcano has stopped erupting doesn't mean it isn't still dangerous.

Roughly 341 people have died since Mount Merapi began erupting in central Indonesia on Oct. 26. As of Dec. 3, Indonesia had downgraded the alert level for the volcano, the BBC reports (other Indonesian volcanoes are still on high alert ).

Yet mud flowing down the sides of Mount Merapi in Indonesia chased hundreds of people from their homes earlier this week. The flooding was worst along the Code River, which flows from Mount Merapi into the city of Yogyakarta, 20 miles (30 kilometers) away. Heavy rains triggered the mudflows, which reached speeds up to 60 mph (100 kph), disaster official Slamet Sugiono told the Associated Press. [Related: Mount Merapi's Devastation Seen from Space .]

With some volcanoes, heavy rain will create a wet slurry of water and ash from the recent eruptions that is pulled down the mountain by gravity, Janet Babb of the Hawaiian Volcano Observatory in Pahoa told OurAmazingPlanet.

As the world's largest archipelago made up of 17,500 islands, with 235 million people spread across them Indonesia sits between the world's most active seismic region , the notorious Pacific Ring of Fire , and the world's second-most active region, the Alpide belt. Sandwiched between the two earthquake belts, the islands experience some of the most powerful volcanic eruptions and strongest quakes on Earth.

Indonesia is home to 129 active volcanoes. The two most active ones Mount Kelut and Mount Merapi (meaning "mountain of fire") sit on the island of Java, where the Indonesian capital of Jakarta is located, about 310 miles (500 km) northwest of them.

Mount Merapi last erupted in 2006, killing two, but its violent history includes a 1930 eruption that killed more than 1,300 people and possibly 70 killed in a 1994 eruption.