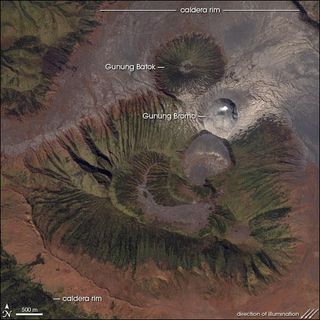 As if things weren't already bad enough in Indonesia, another volcano may be about to blow.

Indonesia straddles the Pacific Ring of Fire and lately, this nation of islands has been living up to the region's fiery reputation. A number of so-called minor ash explosions from Mount Bromo on Sunday (Nov. 28) caused a nearby airport to close as scientists upgraded the volcano to its highest alert level, according to the Indian newspaper The Hindu. On the same island, Java, Mount Merapi's recent eruptions killed hundreds and prompted mass evacuations.

The eruption watch also continues in the straight just west of Java where Anak Krakatau has also been increasingly active lately.

Mount Merapi's devastation has been estimated at $611 million and pyroclastic flows have destroyed huge swaths of forest (and one unfortunately placed golf course), according to the People's Daily Online.

Bromo started rumbling to life on Nov. 8, the AFP reports, and plumes of smoke and ash were rising from the summit crater on Nov. 23. Bromo is a fairly active volcano ; it last erupted in 2004, killing two tourists.

According to Erik Klemetti of Big Think's Eruptions blog, Bromo is a different type of volcano than Merapi, one that tends to have smaller eruptions that belch out ash and perhaps small lava flows, but doesn't produce the large pyroclastic flows scorching rivers of gas and rock that stratovolcanoes such as Merapi do.

Indonesia itself is a very volcanically and seismically active region that lies along the infamous Pacific Ring of Fire . One of the largest volcanic explosions in history, Krakatoa's eruption in 1883, occurred on the tiny volcanic island of the same name between Java and Sumatra, killing approximately 40,000 people. Anak Krakatau, Indonesian for "Child of Krakatoa," is what's left from that historic eruption.

Throughout the summer and fall of this year, Anak Krakatau has erupted hundreds of times a day . That activity has increased lately, but fog and ash have made it hard for volcanologists to monitor the volcano, according to the Jakarta Post.