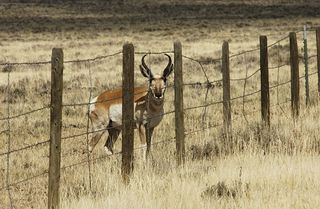 The "Path of the Pronghorn" is the migration route for the fastest land animals in North America, but despite their speed, the pronghorn's migration the longest of any animal in the continental United States is filled with threats. Now conservationists and U.S. wildlife officials have launched a study to better understand the threats so they can ensure a safe migration for the animals.

The Wildlife Conservation Society, Grand Teton National Park and the Wyoming Game and Fish Department, just announced they will observe the pronghorn on its annual 80- to 90-mile (125 to 150 kilometers) migration. This study is an attempt to evaluate the dynamics of their population, as well as potential threats and obstacles that the animals may face as they travel to and from their summering areas.

Researchers are especially concerned with the southern end of the pronghorn migratory route, which passes through both private and federal lands where the largest oil and natural gas reserves in the United States are currently under development. Previous studies have shown that gas field development, migration barriers and other human activities and structures occurring on these lands can impact pronghorn behavior and health.

In addition, the study will observe how the recent re-colonization of wolves in southern Grand Teton will affect pronghorn fawn mortality and population dynamics. Coyotes also prey on pronghorn fawns in the park and are a major threat to fawn survival, though the current status of the coyote densities and fawn survival rates in the park are largely unknown.

Work on the study is already under way. Recently, scientists captured 30 pronghorn in Grand Teton and the adjacent Gros Ventre River drainage area and fitted them with GPS-equipped collars. These will provide scientists with up to three years of data on pronghorn movement, migration patterns and other information, such as survival rates.

Pronghorn, which are found only in North America, once numbered an estimated 35 million in the early 19th century. About 700,000 remain today and more than half of those live in Wyoming.