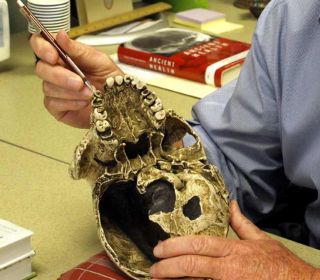 Anthropologist John Lukacs shows a 250,000-year-old "Kabwe skull" from Africa. The sex is unknown, but this specimen has 15 teeth still intact or partially present. 12 of them have obvious damage from dental cavities.
(Image: © Jim Barlow/U. of Oregon)

Women had poor dental health compared to men back in the hunter-gatherer era, and it got worse as societies turned to farming.

Now an anthropologist is pointing to an overlooked explanation — hormonal and dietary changes related to higher pregnancy rates.

Anthropologists usually argue that women's poor dental health resulted from culture-driven factors, such as cooking duties and the ongoing nibbling that can go along with that. But that narrow focus may overlook biological factors connected to women bearing more and more children in agricultural societies.

"We deal with skeletons," said John Lukacs, an anthropologist at the University of Oregon. "There's no saliva, no hormonal effects to be detected."

Lukacs first reviewed studies of both living and prehistoric humans, and found a familiar story across different cultures and nations. Women suffered more cavities than men as they became adults. However, both sexes saw a dramatic boost in cavities as societies became agricultural.

"People do generally agree that a shift from hunter-gathering to agriculture includes a cost in terms of health and nutrition," Lukacs told LiveScience. "Dietary diversity decreases, and people become reliant on fewer crops."

He then honed in on clinical evidence of how reproductive biology affects women's dental health, especially as high estrogen levels trigger certain effects.

For instance, some studies show that women may produce less saliva during pregnancy. Whatever saliva is produced also can't protect as well against bacteria that produce acid byproducts that eat away at teeth.

Other changes in the body and in dietary cravings may also play a role. Women crave high-energy, sweet foods during the third trimester of pregnancy, meaning that they risk more cavities.

"Women eat more frequently during pregnancy because of having a smaller stomach," Lukacs pointed out, calling it an "acid challenge for teeth."

Lukacs added that cultural explanations favored by anthropologists are not necessarily wrong — he himself swore by them earlier in his career. But he said that focusing just on those reasons and ignoring the biological changes that accompany increased fertility misses out on the big picture.

"One of the lessons to be learned is that anthropologists have to take a broader, more inclusive perspective on causation," said Lukacs, whose results are detailed in the October issue of the journal Current Anthropology.