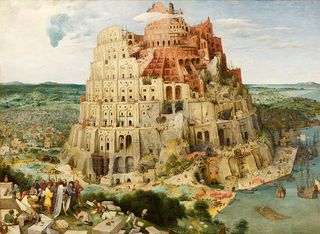 The idea of a universal human language goes back at least to the Bible, in which humanity spoke a common tongue, but were punished with mutual unintelligibility after trying to build the Tower of Babel all the way to heaven. Now scientists have reconstructed words from such a language.
(Image: © Pieter Brueghel the Elder (1526/1530–1569))

The ancestors of people from across Europe and Asia may have spoken a common language about 15,000 years ago, new research suggests.

Now, researchers have reconstructed words, such as "mother," "to pull" and "man," which would have been spoken by ancient hunter-gatherers, possibly in an area such as the Caucusus. The word list, detailed today (May 6) in the journal Proceedings of the National Academy of Sciences, could help researchers retrace the history of ancient migrations and contacts between prehistoric cultures.

"We can trace echoes of language back 15,000 years to a time that corresponds to about the end of the last ice age," said study co-author Mark Pagel, an evolutionary biologist at the University of Reading in the United Kingdom.

The idea of a universal human language goes back at least to the Bible, in which humanity spoke a common tongue, but were punished with mutual unintelligibility after trying to build the Tower of Babel all the way to heaven. [Image Gallery: Ancient Middle-Eastern Texts]

But not all linguists believe in a single common origin of language, and trying to reconstruct that language seemed impossible. Most researchers thought they could only trace a language's roots back 3,000 to 4,000 years. (Even so, researchers recently said they had traced the roots of a common mother tongue to many Eurasian languages back 8,000 to 9,500 years to Anatolia, a southwestern Asian peninsula that is now part of Turkey.)

Pagel, however, wondered whether language evolution proceeds much like biological evolution. If so, the most critical words, such as the frequently used words that define our social relationships, would change much more slowly.

To find out if he could uncover those ancient words, Pagel and his colleagues in a previous study tracked how quickly words changed in modern languages. They identified the most stable words. They also mapped out how different modern languages were related.

They then reconstructed ancient words based on the frequency at which certain sounds tend to change in different languages — for instance, p's and f's often change over time in many languages, as in the change from "pater" in Latin to the more recent term "father" in English.

In other words, if modern-day humans could somehow encounter their Stone Age ancestors, they could say one or two very simple statements and make themselves understood, Pagel said.

Unfortunately, this language technique may have reached its limits in terms of how far back in history it can go.

"It's going to be very difficult to go much beyond that, even these slowly evolving words are starting to run out of steam," Pagel told LiveScience.

The study raises the possibility that researchers could combine linguistic data with archaeology and anthropology "to tell the story of human prehistory," for instance by recreating ancient migrations and contacts between people, said William Croft, a comparative linguist at the University of New Mexico, who was not involved in the study.

"That has been held back because most linguists say you can only go so far back in time," Croft said. "So this is an intriguing suggestion that you can go further back in time."