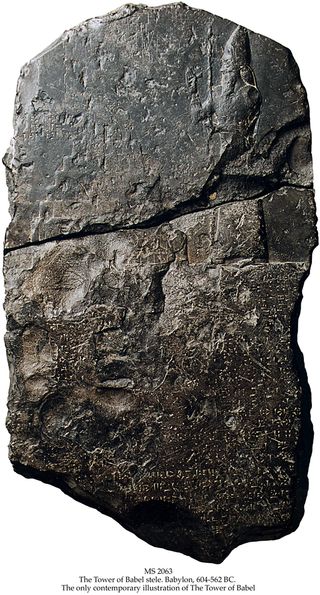 In addition to the inscription this stele depicts King Nebuchadnezzar II standing beside a ziggurat he built at Babylon. The tower is dedicated to the god Marduk. This is one of only four known depictions of Nebuchadnezzar known to exist, and the best preserved.
(Image: © The Schøyen Collection MS 2063, Oslo and Londo)

A trove of newly translated texts from the ancient Middle East are revealing accounts of war, the building of pyramidlike structures called ziggurats and even the people's use of beer tabs at local taverns.

The 107 cuneiform texts, most of them previously unpublished, are from the collection of Martin Schøyen, a businessman from Norway who has a collection of antiquities.

The texts date from the dawn of written history, about 5,000 years ago, to a time about 2,400 years ago when the Achaemenid Empire (based in Persia) ruled much of the Middle East.

The team's work appears in the newly published book "Cuneiform Royal Inscriptions and Related Texts in the Schøyen Collection" (CDL Press, 2011). [Photos of the ancient texts]

Among the finds is a haunting, albeit partly lost, inscription in the words of King Nebuchadnezzar II, a ruler of Babylon who built a great ziggurat — massive pyramidlike towers built in ancient Mesopotamia — dedicated to the god Marduk about 2,500 years ago.

The inscription was carved onto a stele, a stone slab used for engraving. It includes a drawing of the ziggurat and King Nebuchadnezzar II himself.

Some scholars have argued that the structure inspired the biblical story of the Tower of Babel. In the inscription, Nebuchadnezzar talks about how he got people from all over the world to build the Marduk tower and a second ziggurat at Borsippa.

"I mobilized [all] countries everywhere, [each and] every ruler [who] had been raised to prominence over all the people of the world [as one] loved by Marduk..." he wrote on the stele.

"I built their structures with bitumen and [baked brick throughout]. I completed them, making [them gleam] bright as the [sun]..." (Translations by Professor Andrew George)

It wasn't the only time Nebuchadnezzar made this boast. In addition to this stele, similar writings were previously discovered on a cylinder-shaped tablet noted Andrew George, a professor at the University of London and editor of the book.

George points out that the image of Nebuchadnezzar II found on the newly translated stele is one of only four known representations of the biblical king.

"The relief thus yields only the fourth certain representation of Nebuchadnezzar to be discovered; the others are carved on cliff-faces in Lebanon at Wadi Brisa (which has two reliefs) and at Shir es-Sanam," George writes in the book. "All these outdoor monuments are in very poor condition and their depictions of the king are much less impressive than that on the stele."

On the stele, a bearded Nebuchadnezzar wears a cone-shaped royal crown with a bracelet or bangle on his right wrist. In his left hand, he carries a staff as tall as he is and in his right he holds an as-yet-unidentified object. He also wears a robe and what appear to be sandals, common footwear in the ancient world.

George goes on to say that the stele was likely originally placed in a cavity of the Babylon ziggurat before being removed sometime in antiquity. (He declined an interview request due to time constraints.)

Another intriguing inscription, which discusses violence, looting and revenge, dates back about 3,000 years. It was written in the name of Tiglath-pileser I, a king of Assyria. In it, he brags about how he conquered portions of Mesopotamia and rebuilt a palace at a city named Pakute.

One section deals with his conquest of the city of Babylon, defeating a king named Marduk-nadin-ahhe.

"I demolished the palaces of the city of Babylon that belonged to Marduk-nadin-ahhe, the king of the land of Kardunias (and) carried off a great deal of property from his palaces," Tiglath-pileser writes.

"Marduk-nadin-ahhe, king of the land of Kardunias, relied on the strength of his troops and his chariots, and he marched after me. He fought with me at the city of Situla, which is upstream of the city of Akkad on the River Tigris, and I dispersed his numerous chariots. I brought about the defeat of his warriors (and) his fighters in that battle. He retreated and went back to his land."

Grant Frame, a professor at the University of Pennsylvania who translated the boastful inscription, writes in the book that the Babylonians may have provoked the Assyrians under the rule of Tiglath-pileser I into attacking them.

When a female tavern keeper gives you a beer ...

Another newly translated document is the oldest known copy of the law code of Ur-Nammu, a Mesopotamian king who ruled at Ur about 4,000 years ago. He developed a set of laws centuries before Hammurabi's more famous code from 1780 B.C., which includes the "an eye for an eye" rule.

In some ways, Ur Nammu's code is more advanced. For instance, it prescribes a fine for someone who takes out another person's vision, rather than an eye for an eye. Scholars are already aware of much of the code from later versions.

However, the fact that this is the earliest known edition allows researchers to compare it with later copies and see how it evolved. For instance, the copy sheds light on one of the oddest rules governing what you should pay a "female tavern-keeper" who gives you a jar of beer. [10 Intoxicating Beer Facts]

Apparently, if you have the female keeper put the beer on your tab during the summer, she will have the right to extract a tax from you, of unknown amount, in winter.

"If a female tavern-keeper gives [in] summer one beer-jar to someone on credit its nigdiri-tax will be [...] in win[ter]..." (Translation by Miguel Civil)

The lesson? If you live in ancient Mesopotamia don't put the beer on your tab.